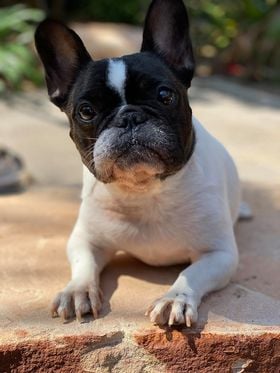 We had the pleasure of receiving Olive as one of our patients back in 2018. She was the new dog in town from Melbourne where she had been seen by internal medicine specialists and ophthalmologist’s who had diagnosed her with a condition called immune mediated optic neuritis. This condition had caused Olive to be blind in her left eye, which eventually went on to effect her right eye too. 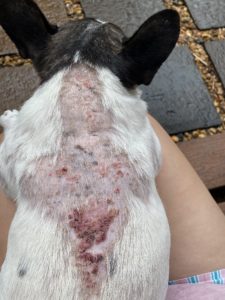 From the day we met Olive she has been a little soldier. Over the last 3 years we have watched Olive go through a lot of up and downs. Olive sits bravely through frequent blood tests which are used to monitor how her liver and body are handling the medication she is on for her condition.

Olive unexpectedly presented to us with one day with neuro deficits in her hind legs which left them shaking and weak. Olive’s condition may have been a primary cause for this episode. At this point it seemed Olives little battle was just beginning.

Next we saw a spike in her parameters, typically her liver readings, which were due to the heavy immunosuppressive drugs she was on. We were on a mission to get her liver enzymes back to normal which meant finding a new medication option for her that would return her blood work back to normal and be kinder on her body.

After long efforts and communication with specialists in Perth we were finally on a new drug regime for little Olive and her elevated readings were slowly decreasing which was great! 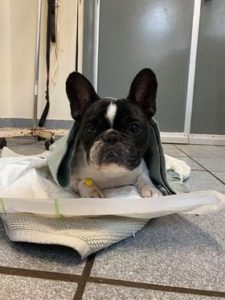 Just when things were looking up for Olive, a skin lesion started to develop on her back. She was placed under general anaesthetic where a skin biopsy was taken and sent off to the labs in Perth for investigation. Olive’s results came in showing a condition called calcinosis cutis. Calcinosis cutis is the accumulation of calcium salt crystals in the skin which is likely caused by chronic steroid use. Olive is always suffering the side effects from steroids so this was just another blow for her.

The Calcinosis cutis continued to spread and eventually occupied most of her back. Unfortunately because of Olive’s eye condition she could not be taken off the steroids completely. Olive regularly goes through the stages of being weaned to lower doses of her drugs to try and give her body a break from all the nasty affects and regularly feeling ill.

After a long journey through relapses Olive was finally managing on a lower steroid dose. This caused her skin to improve and as a result her coat started to grow.

She is the strongest and most resilient little Frenchie we have seen. Even on Olive’s worst days her spirit lifts the mood in the clinic and we look forward to the days we get to see her. She is blessed to have the best parents who tend to her every need. They endlessly go to great efforts to ensure Olive is receiving the best care she can get. Without their dedication Olive’s world would be very different.